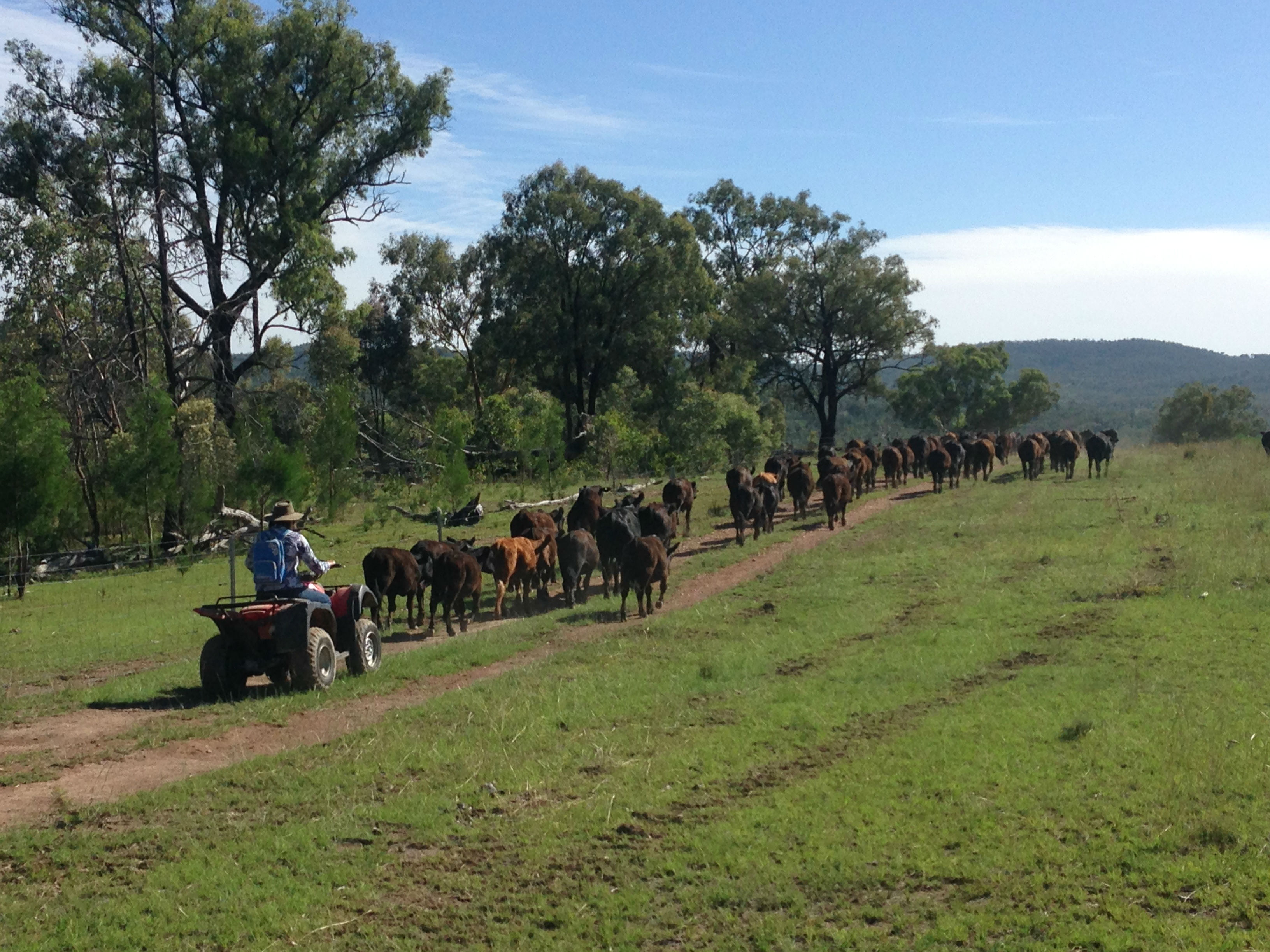 We’ve had over 100 weaners out in the paddock gaining weight over the last year. It was time to muster, i.e bring them in and sort them out. We wanted to identify what was ready to go to market and find out how many heifers were ready to see the bull.

First we have to find them.  Mustering in our large paddocks (some around 1,000 acres) can be quite challenging.
You have to know exactly how many you need to find, by referring to our stock control database, before you start. We check the usual haunts first, around the dams, favourite corners or hills. Of course it’s easy to find 80%. It’s the other 20% that can take the most time and energy. END_OF_DOCUMENT_TOKEN_TO_BE_REPLACED 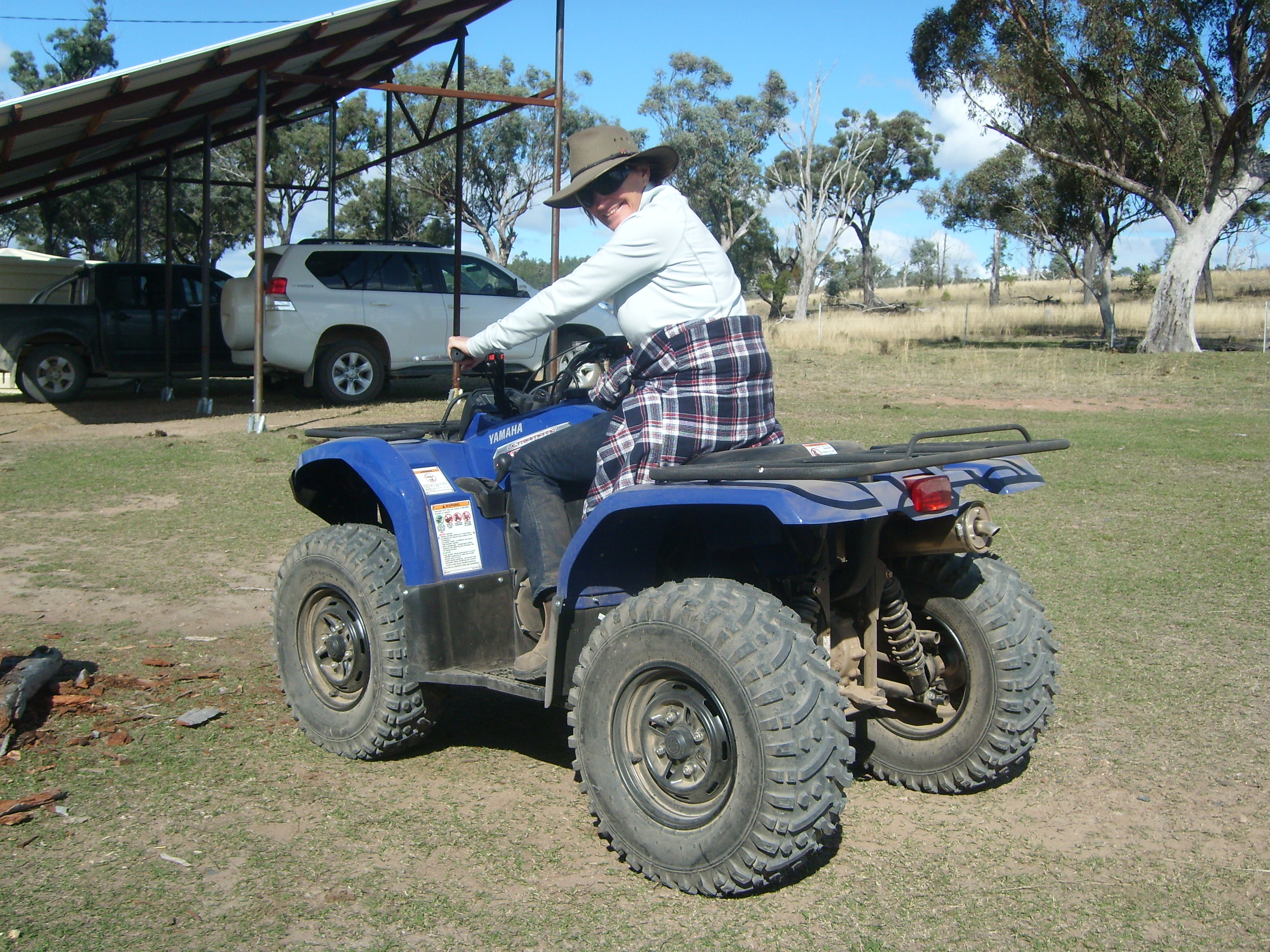 It’s easy to get carried away with your own abilities sometimes. I’ve even boasted about my exploits amongst the Traprock Group at social events. Oops!
Ha! How wrong I was.

We set off yesterday on a fairly routine work detail – to muster one of our breeding herds into the yards (which are in the paddock they are currently grazing). Simple, should only take a couple of hours … until we came across our bull on the road.

He had jumped the fence, no doubt that sniffing impulse they have (they raise their head and flair their nostrils, quit disgusting really) had brought a cycling cow to his attention … on the other side of the fence. He was now grazing with a few of the neighbour’s crew. So, our first job was to get him back. He wasn’t far from the front gate, should have been a quick and easy rescue. Simple!

We edged them down the road and got them to the gate which was open, ready and waiting. All was going well … until, a Belted-Galloway cross, mad as a meat axe, took off full pelt. That set us on a very merry chase indeed in country we don’t know well, rough country. My abilities were stretched to the max … no, I’m lying … I couldn’t keep up! Christopher took off on his two-wheeler in hot pursuit as he charged through the thick re-growth, bouncing over logs and bumpy ground, traversing gullies and gorges.

He soon disappeared and I crept along behind trying to track him by the sound of his bike. I did manage to catch up (pretty impressed I managed to do that!) just as he had them pinned to a fence. It should have been an easy muster down to the fence back to our gate. (Chris admitted later, he didn’t even know I’d come up behind him – shows how much confidence he had in my mustering ability!)

But the unpredictable happened yet again! That naughty Belted-Galloway took off at full pace straight into the middle of the scrub. I’m sure our poor bull would have been quite happy to toddle home, But I guess, perhaps, he had another agenda on his mind. Hmm … whatever … he followed her.

I gave up and was left parked under a tree in some shade confronting the reality of my still yet developing mustering skills. It wasn’t long before I couldn’t even hear Christopher. It seems I have no problem, moving our well-trained, well-behaved stock around familiar territory. But mustering isn’t always so predictable, as I was reminded yesterday.

Now I’ll have to learn to say, “I’m okay at mustering … most of the time.” Sigh, but at least I’m better than when we first started!