Nicole Alexander says the inspiration and motivation for her writing comes from her desire to communicate the grazier’s deep love of and commitment to their land.

We’ve been at Spring Creek now for over eight years and although I understand Nicole is talking about generations of graziers managing, nurturing and developing their properties, I’ve had an inkling of what that feels like, even in my short time on the land.

Several times recently, when driving back from town or back from a visit

somewhere, I’ve had an inner stirring, a sense of pride, as I’ve driven down the road, approaching our grand entrance (it’s not really that grand but we are proud of it). It’s not that Spring Creek is looking its best at the moment. The winter cold and frosts have snuffed the green landscape. Though, thankfully, we still have plenty of grass from a good summer season, it has hayed off and gone brown.

But it’s weird, it’s that “hayed off” colour that I find so charming and appealing. It’s the colour of the Traprock.

We spent last weekend visiting friends on their beautiful block outside Kyogle. The Richmond River district is such different country to the Traprock – green and lush. Though I thoroughly enjoyed imbibing their landscape for a while, I have to say, I’ve realised there is something far more endearing about the Traprock, despite its coarse surfaces, rocky outcrops and shaly valleys.
It has a rugged appeal of its own that I have truly come to appreciate.

I never thought I would have said this. I remember driving around the block with the previous owner, checking it out, considering the purchase. I sat in the back. I was quiet. I was overwhelmed with its size and the amount of work required to make it look “nice”.

But I’ve realised you never really make the Traprock look “nice”. There will always be fallen logs, dead trees, stump holes and regrowth. That’s part of the Traprock charm. (Yet it’s amazing what a few hours in the dozer can do to clean and clear some space.)

We’ve done a lot work. We’ve made a lot of improvements. We’ve built and repaired a lot of fences. We’ve made it home and I’m starting to feel that stirring deep within when I leave and return.

I’m surprised myself to actually feel that … maybe I even love Spring Creek. 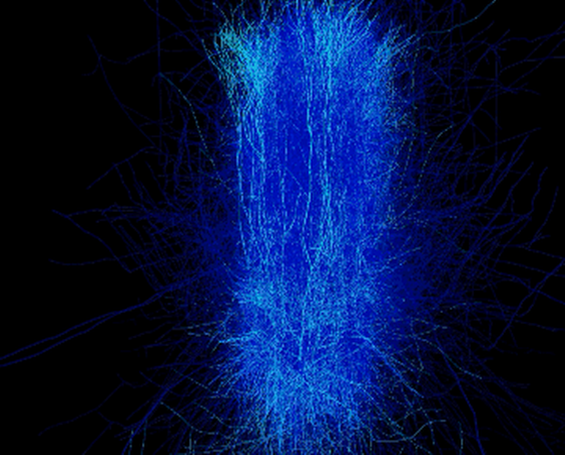 In making the leap from the corporate office to running a cattle property, I had to go through numerous adjustments … as you can imagine.

My work at Virgin Blue was implementing change at the corporate level. I was bumping heads with strong-willed general managers. It was extremely intellectually challenging to navigate their ambitions yet change their ways of working to help consolidate a young, fast growing company.

In coming to Spring Creek, I missed the fiery, stimulating intellectual debate my relationships at VB had afforded me. I’ve had to look for new avenues for intellectual stimulation.

It’s not that living in the bush isn’t intellectually challenging at times. You are more often than not drawn into significant problem solving – the dozer stuck in a dam, the fallen windmill that has to be re-erected … and these are more frequent occurrences than most would like.

Then I discovered MOOC’s (Massive Open On-line Courses)! They are brilliant. They are delivered over the internet, they’re free and they’re university standard.

I’ve just finished my first one: Neurons, Synapses and the Brain. I sat in my remote farm house, looking out across the paddock, listening to a cute Jewish professor instruct me on the intricacies of neuroscience – at the perfect level for my current understanding. Brilliant!

Discovering www.coursera.org has definitely filled a hole for me. I now understand the current thinking and research on the workings of the brain. Why do I want to know about that, you ask?

Of course it isn’t just for the pure fun of it … it’s research for my second book, Mind Minders.

But overall, I guess it’s about finding my way in a remote, isolated community. I still want to grow and develop and learn. I want to think along new lines and explore new avenues such as … do we really have free will or are our actions dictated by the neural networks in our brain? Now that’s an interesting debate and has sparked a few conversations.

Can’t wait for my next MOOC and to see where that will lead my thinking! 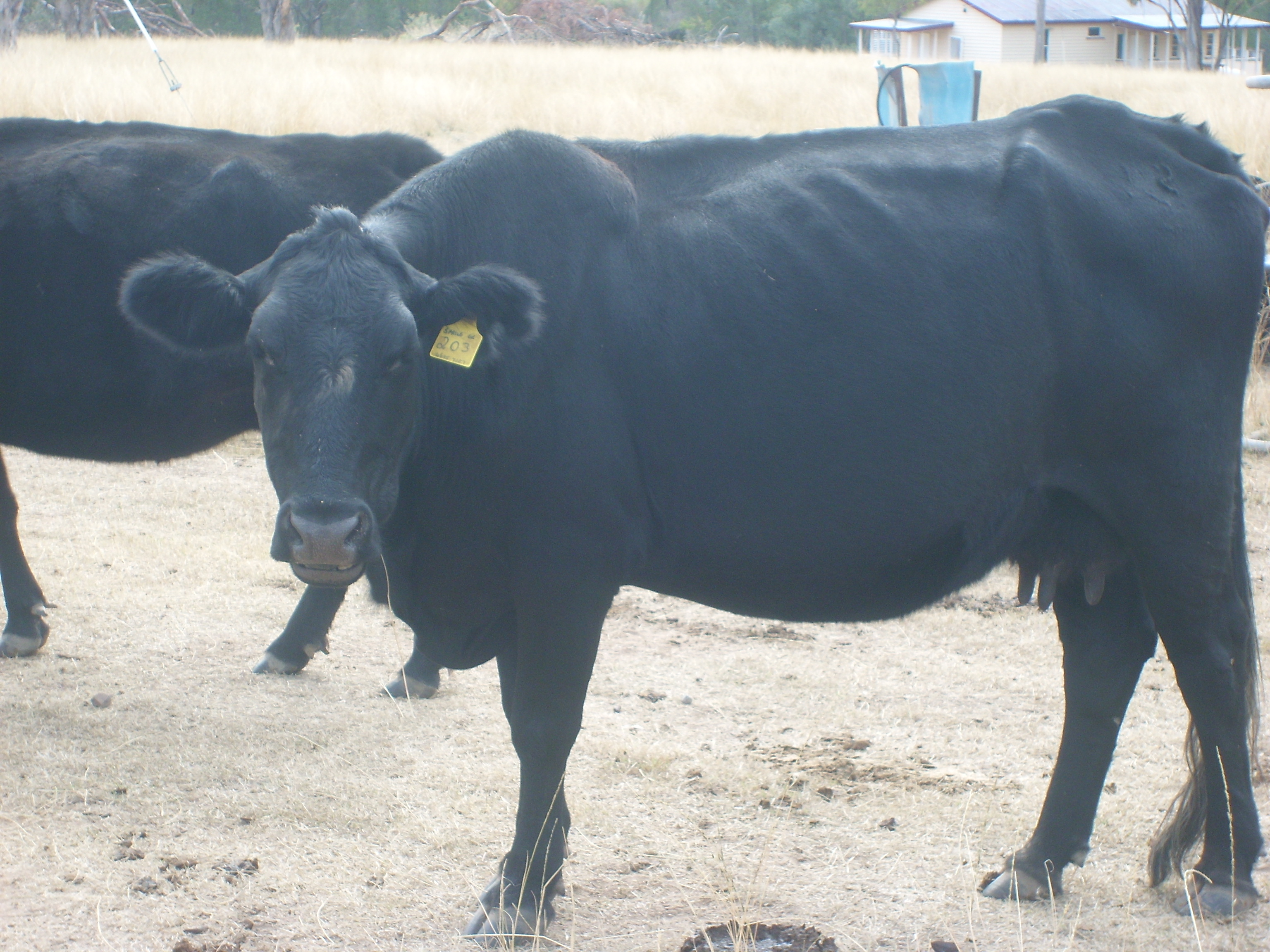 As I’ve often mentioned, there are lots of emotional challenges running a cattle grazing property. One thing I don’t really look forward to is … weaning time!
Each year, just before winter, we have to take the calves away from their

Going into winter, our dry season, is tough on all the stock but particularly lactating mothers. Mums need to eat a lot of grass to sustain themselves as well as feed a 250kg calf. Cows can quickly lose condition when the protein store in the grass depletes.

It’s better for cow and calf to be separated so we can provide the best care.
Having said all that … they don’t like it all!!!!

The cows glare whenever you come near, their eyes pleading “Please give me back my calf!”

And the poor things … their udders are bursting.

But after three days and three nights, it’s all over. The mums give up and we muster them to their winter paddock. The calves stay in the yards for a bit longer to make sure they are quite calm. Then they are released into a paddock near the house so we can keep a watchful eye on them.

All in all, it’s a rather traumatic experience for all concerned and I’m always glad

when it’s over. It’s hard to sleep with all that racket. At last it’s done … until next year. Sigh! 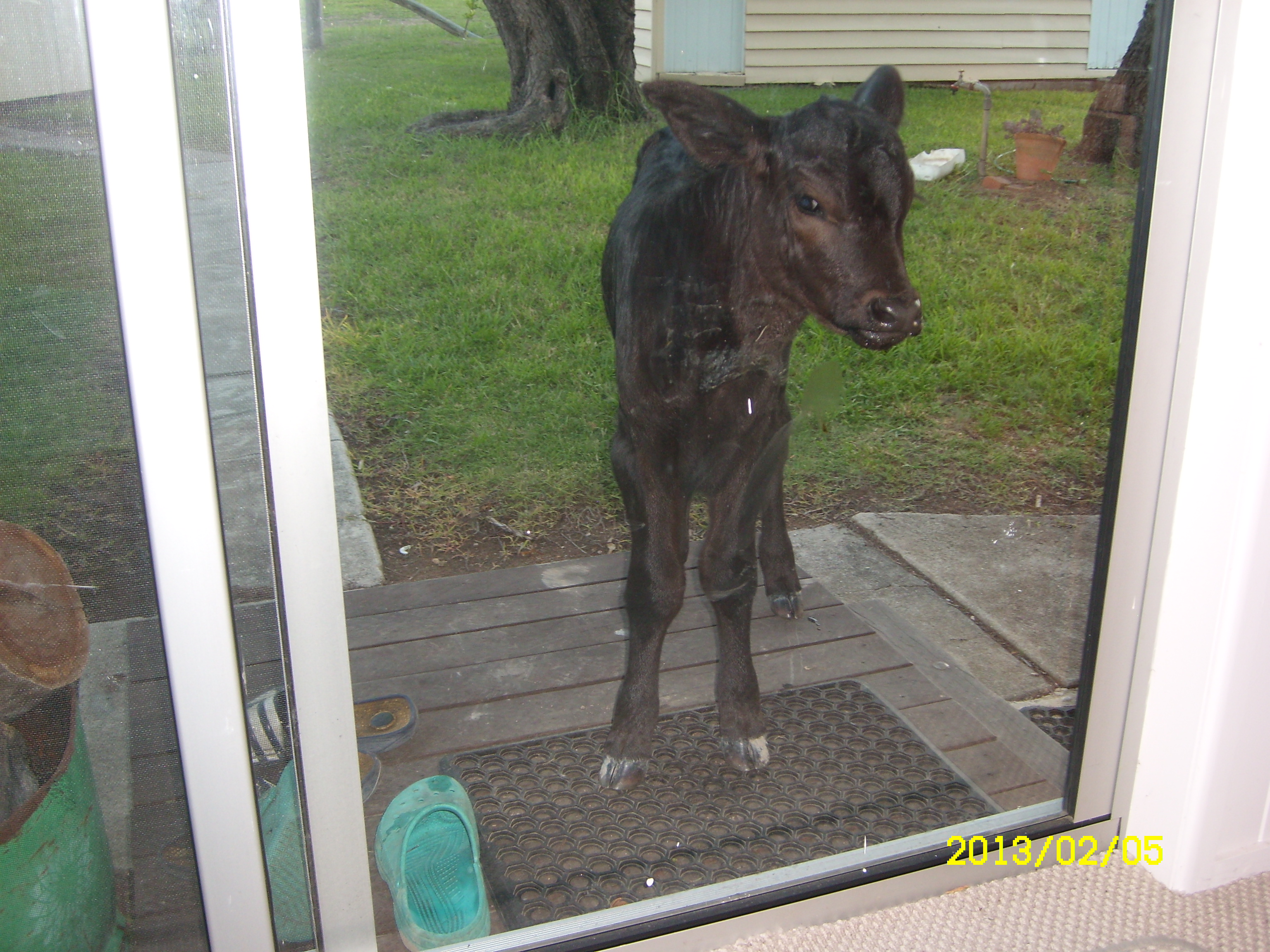 It’s tragic when you come across one of your cows struggling to stay alive. Such was Rikki’s mother when we found her – too late, her afterbirth not released had become septic. There was nothing merciful to do but shoot her. She could barely stand.

But what of her little calf – just a few days old? We managed to run her down, catch her, take her home and name her. She was terrified the poor little thing.

Though she was depressed for about a week, she adapted quickly and learned to suckle the bottle the first day. She bonded with us too and was most upset when we retreated inside the house. She would stand at the back door, trying to get in.

Being empty-nesters, both Chris and I embraced the opportunity to look after someone again. We’re quite pathetic really, LOVING having someone dependent once more. The twice daily feeding regime was no burden at all.

But we couldn’t maintain her emotional dependence on us … tempting as it was. So we relegated her to one of the paddocks near the house holding some of last year’s offspring. She could make some new friends.

Each morning, Rikki would stand at the gate bleating, calling for her bottle. But it was never enough. She always wanted more, her sucking reflex so strong, driving her. Also, you had to be ready for her reflex to nudge the udder (which normally would release her mother’s milk). A sharp, sudden head butt could catch you off guard in awkward places (particularly for Christopher!).

Though it’s probably socially improper to share this with you, some of her new friends liked to take advantage of her sucking reflex. Some quickly switched on steers, would stand close by waiting for the end of her feed whereby she would happily oblige them by finding something else to suck … I’ll leave it to your imagination! These are the realities of living at close quarters with wild beasts who exhibit none of our social constraints!

Though Rikki is more independent now, we still love her. It’s nice to give her a hug and she loves having her belly rubbed. I’m glad she wasn’t a young bull as we will be able to integrate her into our breeding herd eventually. Young bulls (once turned into steers) go off to market at the appropriate weight. That would have been a sad day.

I always feel a little sad when the young steers and heifers go off to market. Life as a grazier is full of emotional challenges but, I guess, saying goodbye to your well-cared-for stock, is a minor one when all things are considered.

At least I won’t have goodbye to Rikki … not for a long time anyway.